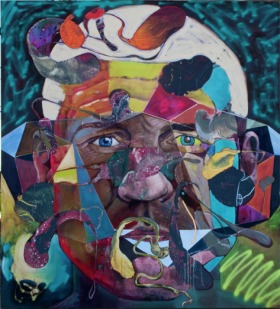 a self portrait, 96 x 84 inches
Max Presneill is a Los Angeles based UK artist and curator. He has exhibited throughout the world including New York, Mexico City, London, Amsterdam, Paris, Berlin, Vienna, Istanbul, Sydney, Beijing and Tokyo in museums, art galleries, alternative spaces and art fairs.


His work has been shown at art fairs including The Armory Show, NYC and Miami Projects, Miami and has been included in the Istanbul Biennial and the Yokohama Triennial as well as museums, including Lancaster Museum of Art & History (California), Museum Villa Seiz (Germany), Ucity Art Museum (Guangzhou, China), Art Museum of W Carolina University, 9 Art Center Museum (Beijing, China), Van Abbemuseum and the Hudson Museum (both in The Netherlands), and the Mappin Museum (UK).

Curatorially, he is the Director/Head Curator for the Torrance Art Museum (www.torranceartmuseum.com). He has extensive experience internationally as a curator having organized exhibitions for museums, institutes and galleries in the US and UK, the Netherlands, Japan, France, Mexico, China, Turkey, Australia, Germany, Austria, Norway and more. He was also a contributing writer to the emerging artists section of FABRIK magazine. His curatorial interests are with artist led projects, emerging art, new models for curatorial methodologies and an international scope for partnerships and exchanges. He was the Founder/Director of Raid Projects in Los Angeles (1998-2008) a alternative gallery and Artist-in-Residence program, the Founder and Curatorial Director of ARTRA Curatorial as well as the Co-Founder of Durden & Ray, in Los Angeles, an artist's collective and gallery (2009-current).

2. Following within the traditions of the momento mori and the vanitas the paintings maintain a permanent reflection on ones own mortality and the transitory nature of subjective experience.

3. Engaging with ideas arising from the sciences and philosophy - Meme Theory, Mechanistic Theory of the Mind, Neo-Existentialism, Socialism and others, which inform the way I construct a context for the paintings beyond art theories.

4. Dystopian visions, via earlier forms of Brutalism, incorporate the socio/economic ‘architecture' of this age.

5.  To highlight the umbrella under which the paintings reflect a multi-verse, maximalist system of interconnected ideas from across personal histories.

The usually large scale abstract paintings of Max Presneill employ a vibrant and often jarring field of color, embedded with marks, scrawls, erasures and blockages, to question the act of painting and it's relationship to issues of existential intent and obligation, thus leaning towards both a statement of individual presence (and thus a resistance to his own mortality) as much as an oblique political statement. The marks themselves, sourcing from graffiti, art history, accident and design, showcase a myriad of bravura methods of applying paint, in a move and countermove game of suppression and control.

I am interested in what the act of painting means and how it can explore multiple avenues of enquiry simultaneously. From existential questions, to an awareness of presence and mortality, to notions of masculine codes, all can be encompassed, for me, within the structures of thought and application of material that painting represents. When I die my paintings are what will remain. They contain my memories, hopes and dreams. An identity of sorts and the drive towards cognitive meaning, all within the political possibilities in painting.

The paintings reflect a curatorial model of selection and placement, of the key motifs of my developing language of forms, marks and gestures. This leaves them in a form of community, all elements in a dynamic relationship of meaning, a social model of knowledge. Modular, Frankensteinian within the boundaries of the canvas as a performative arena, a stage or set where decision making engages the very human need to provide networks of understanding and cognitive associations. It is a rare space where responsibility, of identity, of choice is focused.

Although they are engaged with ideas of mortality and death, as well as existential states and political action, they do so in a celebratory sense by raging against the negative and dark unknown of these unavoidable ends. Using color and bold compositional structures they go loudly on their way towards that finale.

The core ideas in my practice have always revolved around notions of mortality, the mark as presence and the decisions and choices in painting that imply a type of existentialism as well as a reflection on our core humans as cognitive animals. As an atheist I am concerned with issues to do with the nature of free will and choice and how invested beliefs in our lives allow us fulfillment and political agency – as the act of painting, a process of self-defined questions and answers within a larger language system, is inherently. The new paintings concentrate on this act as both a literal thing – the making of a mark of presence, as well as a metaphor for the philosophical position. The marks are both literal – they are paint to make a painting, they are marks of presence – but they are also allusional and metaphorical.

Another very important thread for me is the possibility of a political awareness engaging the viewer through the process of abstraction. Can these marks be persuasive political commentary? The question is intriguing. My hope is that the constant applying of marks and their negation through further marks can act as a reflection of the struggles against Power and the constant battle for supremacy between the People, or me at least, and the interests of Authority. The picture plane acts as the liminal arena for this struggle, of potential movements and mutations towards differing strategic positions, of redirections of forces and the forging of new alignments, both offensive and defensive. They are a constantly shifting chess game of provisional wins, losses and stalemates.

What you see here is NOT what you get...
By taking “inaccurate” photographs of my work for publication in catalogs and online, I want to stress the difference between the image and seeing the actual work in the context of a gallery wall — the real-life interaction as opposed to the Digital, online or printed ones. Whether the reproduction is inaccurate due to color differences, shadow or reflecting light, or because it has been partially repainted since the photograph was taken, these photographs separate the real from the copy. The emphasis is on seeing them in the flesh. Anything else is but a shadow on a cave wall.

​The Zeitgeist of Artisanal for the maker/organizer -
As an Artist/Curator I have been equally engaged with these two aspects of my artistic practice for about 20 years now. Although I kept the activities separate for many years, due mostly to the pressure from a culture that informed me that they should be held apart from each other like forbidden lovers, I slowly began to become more aware of the tight natural bond they shared for me and how they emerged out of each other regardless. My paintings followed a course that echoed my curatorial nexus points and vice versa. As this became apparent I have fostered it and have sought to see both understandings share a common inter-relationship, whether in the gallery space or the space of the canvas.

The curatorial impulse inflects the painting practice through a methodology that sorts sources, prioritizes, makes decisions both intuitive and structured, establishes a coherent structure to allow for meaningful relationships and configurations between these elements to build into something more than the sum of its parts. The canvas is in some way an 'exhibition' then, of these combinations.

A careful selection of disparate elements and their placing in visual alignments to create extended networks of meaning and association but within the closed arena of the canvas, its white cube-like analogy ever present, makes for chess-like stratagems, movements, feints and thrusts which battle for control and dominance. This is a political engagement.

The painterly / curatorial role becomes one of placement and alignment, of selecting and editing, of personal and intellectual assemblage - the Zeitgeist of Artisanal - as a reaction against mass-produced, digital, branded experiences - to allow an existential positioning within the world of Being, objects and meaning.

The Cloud
Presneill has often shown his smaller paintings in groupings referred to as “the cloud.” This cloud contains multiple canvases that act — by the location of their installation, in reference to each other and in the sequence of their placement — as extended narratives that include materials taken from autobiographical sources, the Internet, literature, and the history of art, among other places. They exist in a fluid, interchangeable relationship that allows them to be renewed with each showing, to have some removed and some replaced, with no set number of pieces and no continuous members within the grouping. This reflects the artist’s changing focal points of interest and establishes new ways of reading the material that mirror ongoing concerns and engagements, as well as the curatorial impulse.

Previous Statement - REDACT/RD series - July 2015
The key word for me is REDACTED. This seems to me to tell us what our current relationship to government, corporate structures, et al, is at present. The zeitgeist of our recent times seems to reflect that distrust. The removal, erasure, coverage, negation that plays in a loop of mark marking with the dichotomy of the affirmations, signs of presence and active imposition cause an oscillation between the struggles, veering to extremes in the battle for supremacy.

As the Director/Curator of the Torrance Art Museum and the Curatorial Director of ARTRA Curatorial his general artistic concerns are often reflected in his curatorial projects.

I hope to reflect upon the relationship between fact and fiction as well as past and present. Within reconstructed histories and mythologized experiences, the forged connections that play between remembering and invention act as considerations of the nature of reality, power and identity. In the end, the paintings are the remnants and evidence of the cognitive, problem-solving nature of painting and the human experience, or at least mine.

The current work also explores the notion of the self and its relationship to others, memory, the political, the digital world and shared cultural histories. By sourcing from areas of his past, personal obsessions and culturally shared phenomena and histories, Presneill’s paintings seek to address issues of attention, interpretation, facticity, the politics of representation and the generation of meaning.

By continuously painting over each work, Presneill leaves layers and creates new ones to develop a dynamic and liminal space in which the meanings can be retuned and realigned in constant flux, reflecting the stream of ideas and influences that shape our perceptions. This also means that many paintings are many years in the making, and this process is halted only when the work is on display outside of the studio. If acquired by an individual or institution they remain locked in time, frozen as they are, but if returned to the studio they again become part of the never-ending cycle of amendments. Often created by taking other artists’ rejected canvases as a starting point these layered paintings impose another way of reading the work. They generate new complexities through new applications, the conceptual reasoning behind the implication of community, the importance of peers, as well as the destructive act.

The narrative elements allude to situations, both specific and general, factual and imagined, that place the importance of the act of painting within a set of existential, self-affirmed constructions of reality and value. Isolated, decontextualized or reconfigured, they singularly float in a river of uncertainty, like our own reflection in still water, somewhat familiar but not quite self — what is seen differing from what is felt. The hermetic, subjective experience and shared cultural expressions constantly oscillate between understanding and illegibility, with a sense of melancholic loss and moments of celebration. They exist within the gaps between things as both personal story and political metaphor.